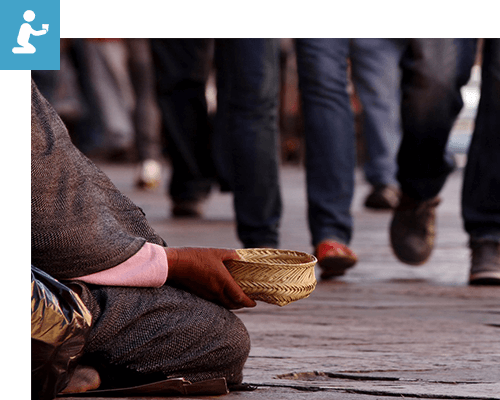 Forced child begging is a type of begging in which boys and girls under the age of eighteen are forced to beg through psychological and physical coercion. Begging is defined by the Buffalo Human Rights Law Review as “the activity of asking for money as charity on the street”.

There is evidence to suggest that forced begging is one industry that children are trafficked into, with a recent UNICEF study reporting that 13% of trafficking victims in South Eastern Europe have been trafficked for the purpose of forced begging. The severity of this form of trafficking is starting to gain global recognition, with the International Organization for Migration (IOM), the European Union, the International Labour Organization (ILO), and the United Nations, among others, beginning to emphasize its pertinence.

The European Union’s Brussels Declaration on Preventing and Combating Trafficking includes child begging as one form of trafficking, stating “trafficking in human beings is anabhorrent and worrying phenomenon involving coercive sexual exploitation, labour exploitation in conditions akin to slavery, exploitation in begging and juvenile delinquency as wellas domestic servitude.” This issue is especially difficult to regulate given that forced begging is often imposed by family members, with parental power leveraged over a child to ensure that begging is carried out.